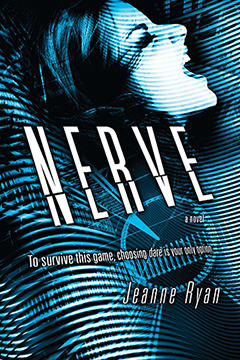 Well, anyway … it was definitely rough

“ARE YOU PLAYING THE GAME OR IS THE GAME PLAYING YOU?”

Vee is a shy logical girl who lives life behind the scenes. NERVE is an online phenomenon where players log on and complete dares for money and prizes. By all definitions, Vee is a “watcher” and not a “player” in the world of NERVE. But after seeing the guy she likes kiss someone else, Vee decides that she is through being backstage in her own life and decides to take a risk and play. The game brings her together with “hot” Ian (who I really don’t remember anything about except that he was hot) who helps her break out of her shell and compete. Suddenly (and boy do I mean suddenly because I swear this book went from 0 to WTF in NO TIME) they find themselves in a competition for their lives (no seriously, I made that sound WAY more interesting than it actually was).

“Vee doesn’t know if she has the guts to play NERVE, an anonymous online game of dares. But whoever’s behind the game knows exactly what she wants, enticing her with lustworthy prizes and a sizzling-hot partner. With Ian on her team, it’s easy to agree to another dare. And another. And another. At first it’s thrilling as the Watchers cheer them on to more dangerous challenges. But suddenly the game turns deadly. Will Vee and Ian risk their lives for the Grand Prize dare, or will they lose NERVE?”

I really like the concept of this story. We live so much of our lives constantly connected to the internet these days that this futuristic concept seems (at first) very believable. I could absolutely see an online game like this popping up in reality.

I also enjoyed the beginning of this story. Vee was an interesting character and I was excited to watch her step outside of her comfort zone in some wild, awkward, and embarrassing ways.

The first few dares were very fun to read about. Embarrassing dares that would be enjoyable for the watchers of the games. Unfortunately, the dares quickly become personal and greatly detached from what I as a watcher would even give two fucks about seeing. Yeah, it sucks for the players, but who cares?

As the dares increased in difficulty, I had a really hard time connecting with the story. I wanted either more super embarrassing dares and a really nice coming of age story to go along with it ….. Or I wanted wild, freeing, high adrenalin craziness. What I got was boring and farfetched slow moving situations.

The climax of the book was INSANE (and not in a good way). I seriously found myself rewriting this book in my head to make sense (I do that sometimes when I’m not willing to accept defeat and dnf a book). Really and truly … it was boring. *SPOILER* This part of the story was basically The Hunger Games if The Hunger Games was sitting in a room pointing a gun at everyone else waiting to see who would fire first for about 1/3 of the book. *END SPOILER* It sort of read like watching paint dry tbh.

I didn’t give a f*ck about any of the characters. Which is why I have failed to mention the varying cast of cliché characters that appear in this book … Because seriously … They are all pretty much not worth mentioning.

This book was nothing to write home about. It was boring, farfetched, ridiculous, weird and plain. This “high octane” story was, sadly, anything but exciting.

If you want to read a decent book with a similar premise, I would suggest Panic by Lauren Oliver. Very similar but in my opinion, a better application of the underlying concept.