What if instead of judging a book by its cover, its author or its prestige, we judged it by its opening lines?

“Prayer candles flicker in my bedroom. The Scriptura Sancta lies discarded, pages crumpled, on my bed. Bruises mark my knees from kneeling on the tiles, and the Godstone in my navel throbs.”

Read on to find out what book this excerpt is from 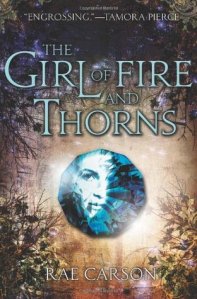 This book has been making its rounds all over my TBR for years! Seriously though … I just need to read it already!

“Once a century, one person is chosen for greatness.
Elisa is the chosen one.

But she is also the younger of two princesses, the one who has never done anything remarkable. She can’t see how she ever will.

Now, on her sixteenth birthday, she has become the secret wife of a handsome and worldly king—a king whose country is in turmoil. A king who needs the chosen one, not a failure of a princess.

And he’s not the only one who seeks her. Savage enemies seething with dark magic are hunting her. A daring, determined revolutionary thinks she could be his people’s savior. And he looks at her in a way that no man has ever looked at her before. Soon it is not just her life, but her very heart that is at stake.

Elisa could be everything to those who need her most. If the prophecy is fulfilled. If she finds the power deep within herself. If she doesn’t die young.

Most of the chosen do.“