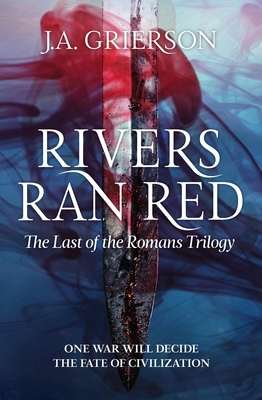 Rivers Ran Red: The Last of the Romans Trilogy by J. A. Grierson

Can J. A. Grierson write all the History books from now on please?

An extremely well written and well researched historical fiction based on the events surrounding the Battle of the Catalaunian Plains and the Roman’s defeat of Attila the Hun.

“In a whirlwind of fire and carnage, Attila the Hun wheels half a million horsemen towards Roman territory. In his path, corruption and greed have undermined the ancient empire and the vacillating emperor, Valentinian III, has cut her legions to a sliver. But out of this smoke a wily, battle-scarred general, Avitus, rises in her defence. Making allies of his enemies, Avitus rallies barbarian warlords to fight for the Eagle and crosses the Alps to face Rome’s nemesis. But when Attila offers to split the Empire’s corpse with the Goths his march becomes a suicide mission.

One war will decide the fate of civilization.

The Battle of the Catalaunian Plains rages through the night. Individual acts of bravery and cowardice tip the final balance. Rivers run red and burst their banks with blood. Dawn draws a portrait of unimaginable carnage.

In a tale of epic deeds, heroes confront insurmountable odds, with honour and courage. Avitus faces a myriad of enemies, both Roman and barbarian but can one man save civilisation?“

Just, wow. I could NOT put this book down. I am by all accounts a fantasy reader only. Sometimes when I am in a reading slump, I will pick up other genres … but typically it’s all fantasy, all the time. This reads like an epic fantasy. Extremely enjoyable, extremely bloody and entirely real. I was connected to all of the characters, their lives, their history and their events. I cried when they died, I cheered when they were victorious. This book did more than just chronicle the history of these individuals … this book immersed me in the world of military power, political intrigue, love and life and death. This book is everything books should be.

The historical accounts were well researched and didn’t feel like History class … and the fictional elements were believable and complimentary to the history of that day and the characters who would have existed.

The beginning of this book was plagued by pretty purple prose … but this daunting adjective stuffing fell out of Greirson’s writing around the second chapter (once the dialog started) and the book became much more enjoyable to read.

I would recommend this book for anyone who enjoys a good Roman history, and for fans of fantasy with epic battle scenes and political intrigue.