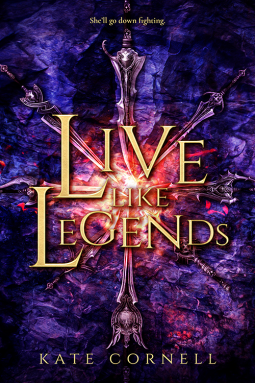 This was such a hard one to rate and review. I enjoyed it, but it could have been SOO much better if for one simple fix which I discuss below. All in all, not a bad debut.

Kalista is married off to a prince she did not intend to marry, to a Kingdom she knows nothing about, to fulfill a prophecy that will lead her into a world where a monster thirsts for royal blood. But who are the real monsters?

“Princess Kalista has known her role from birth. She’s spent her entire life preparing to be the socialite wife of a prince from a peaceful kingdom. But on her big day, she is shocked when she is instead forced to marry the warrior prince of a cursed land, who is as cold as the wintry kingdom he’ll one day rule.

Carson has a throne no princess wants to share with him. An immortal beast ravages their land, and he’ll do anything to stop it, even marry a complete stranger on the day she was supposed to wed her betrothed. Let her hate him for it, but Kalista is his only hope for peace.

Kalista knows she’s just a pawn on the chessboard of politics, but now she’s expected to kill an unstoppable creature because of some legend about her bloodline that Carson believes as truth. He trains her how to fight, and when lessons in swordplay lead to lessons in love, her destiny puts more than just her life at risk.

How far is she willing to go to save the prince she never wanted…but can’t imagine living without? “

The concept and the world was very interesting. The characters were well written. And the plot was spot on. I also really enjoyed the romance. Toward the end, I was definitely invested in their outcome … buuuuut …

Honestly, if this had been a duel POV book, it could easily have been a 5 star read. Such a tragic missed opportunity. I don’t think it completely works as a single POV story. Still enjoyable but for the most part uneventful and boring. I did finally start to emotionally attach to the romance in the last 35% of the story, but I feel like it could have been an incredibly emotional story if ONLY FOR DUEL POV!!!

Unfortunately, because it was only one POV, the main character couldn’t understand anyone else most of the time and therefore any connection I could have had to any of those character was also lost on me.

I enjoyed this read. It was quick and easy and intriguing. but DUEL POV!!! I hate that it could have been such a simple fix 😭