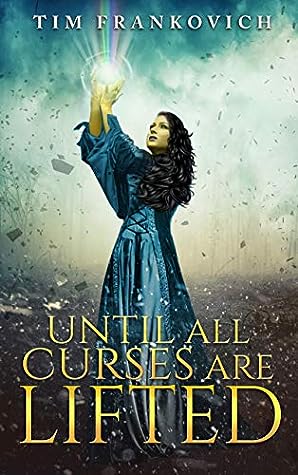 Until All Curses Are Lifted by Tim Frankovich

This book is a glorious winged beast leaping from the nest before it is quite ready to fly.

This story was every bit of promising, every element that makes up an incredible story was present … almost. Where this book fell short was in the writing. I honestly fell like this is a problem with not enough revisions, not enough editing, and not enough people being critical with their reviews. Which is actually quite tragic … because this story, this world, these characters … are all incredible. Not to mention a unique magic system which is hard to come by in this day and age.

You have Marshal and you have Seri. Basic chosen one scenario on both ends. Mashal is cursed through no fault of his own and has a back-story that I’m sure we can all pretty early on guesstimate. Seri wants to be a mage … the first female mage … the first female master mage … but we don’t every really get much about her as to why … or as to why she was chosen as an acolyte. All of these things are just expecting the reader to accept and move on … which I do not like. But we will begin with some positives.

“The laws are enforced by magic.
If you break the law, you’re cursed.
But the rich and powerful twisted the laws to allow for… exceptions.

Marshal has been cursed since birth for his unknown father’s crimes. When he discovers he’s also heir to immense magical power, he must flee for his life. His half-brother wants the power for himself and has hired an assassin to pursue Marshal and his mother. No one has ever escaped from a curse, but it’s the only way for Marshal to be truly safe.

Seri wants to become the most powerful mage in history. But the magic that holds the world together is failing and no one knows why. While the ground itself shakes, someone begins murdering mages. In danger from all directions, Seri must learn how to use her unique abilities before everything falls apart.

Neither of them know they are being watched from another realm…“

I enjoyed reading this book, although I had to turn off the critical reader parts of myself in order to do so. Surface level, this is a wonderful story. Extremely enjoyable even with all of it’s flaws. I cared about the characters … even though I felt like their stories were underdeveloped. I enjoyed this world, even though it lacked spacial descriptions to set the atmosphere.

I will say that the one thing that was not lacking was the magic system. Extremely unique and very well explained. I thoroughly enjoyed this aspect of the story.

As I mentioned, this book lacked something in almost every aspect of the writing. It was doomed to be always “almost”. The dialog was not great, with much of it being unnecessary and even cringe-worth at times. The characters could have been pushed a little more, especially supporting characters, all of which fell extremely flat. Because the secondary and supporting characters were underdeveloped, the relationships between the characters felt flat as well.

I think Marshall’s side of the story was a little more successful over-all. Seri’s story had a lot of plot holes that, again, I feel could have benefited from letting this whimsical story marinate a while longer before publishing.

I enjoyed the world and the story, but I am saddened by the potential this book had and did not achieve.